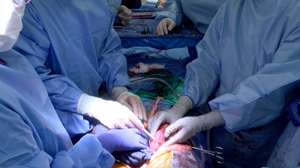 Notably, the study was designed and conducted to meet standards directly comparable to those that would apply to a Phase I clinical trial and mirrored — as much as possible — every step of a conventional transplant between humans. Importantly, this study included removing the human brain-dead recipient’s native kidneys before replacing them with genetically modified pig kidneys.

“Along with our partners, we have made significant investments in xenotransplantation for almost a decade hoping for the kinds of results published today,” said Selwyn Vickers, M.D., dean of the UAB Heersink School of Medicine and CEO of the UAB Health System and UAB/Ascension St. Vincent’s Alliance. “Today’s results are a remarkable achievement for humanity and advance xenotransplant into the clinical realm. With this study, our research teams have also demonstrated that the decedent model has significant potential to propel the xenotransplantation field forward.”

For the first time, the pig kidneys transplanted were taken from pigs that had been genetically modified with 10 key gene edits that may make the kidneys suitable for transplant into humans. This process demonstrates the long-term viability of the procedure and how such a transplant might work in the real world. The transplanted kidneys filtered blood, produced urine and, importantly, were not immediately rejected. The kidneys remained viable until the study was ended, 77 hours after transplant.

“This game-changing moment in the history of medicine represents a paradigm shift and a major milestone in the field of xenotransplantation, which is arguably the best solution to the organ shortage crisis,” said Jayme Locke, M.D., director of the Comprehensive Transplant Institute in UAB’s Department of Surgery and lead surgeon for the study. “We have bridged critical knowledge gaps and obtained the safety and feasibility data necessary to begin a clinical trial in living humans with end-stage kidney failure disease.”

Gene editing in pigs to reduce immune rejection has made organ transplants from pigs to humans possible, which could offer help to thousands of people who face organ failure, disease or injury. The natural lifespan of a pig is 30 years, they are easily bred and can have organs of similar size to humans.

Genetically modified pig kidneys have been extensively tested in non-human primates. In addition to testing in non-human primates, evaluating genetically modified pig kidneys in a human preclinical model research may provide important information about the potential safety and efficacy of kidneys in human transplant recipients, including in clinical trials.

“This human preclinical model is a way to evaluate the safety and feasibility of the pig-to-non-human primate model, without risk to a living human,” Locke added. “Our study demonstrates that major barriers to human xenotransplantation have been surmounted, identifies where new knowledge is needed to optimize xenotransplantation outcomes in humans, and lays the foundation for the establishment of a novel preclinical human model for further study.”

“All of us at Revivicor are in awe of the historic achievements at UAB with our investigational 10-gene xenokidney, or UKidney,” said David Ayares, Ph.D., Chief Scientific Officer of Revivicor and a trailblazing genetic engineer since his early work cloning the world’s first pigs and the first alpha-Gal knockout pigs. “We feel confident that this UKidney may turn out to be a life-saving solution for thousands of people on dialysis, subject to successful completion of our clinical trials and achievement of FDA approval in the next several years.”

About the study
The peer-reviewed research is a study of ambitious scope and great significance, given that more than 800,000 Americans are living with kidney failure. Most never make it to the waiting list, and far too few human organs are available to put a dent in that number. Although dialysis can sustain life for some time, transplantation offers a better quality of life and a longer life for the few individuals who can gain access to transplantation. Each stage of this decedent xenotransplant study approximated the steps that might be taken in a Phase I xenotransplant clinical trial:

The study was conducted to meet the standards directly comparable to those that would apply to a Phase I human clinical trial, mirroring every step of a standard transplant between humans. It included Institutional Review Board and Institutional Animal Care and Use Committee approval, a tissue compatibility confirmation before starting the operations, using the standard procedures of human-to-human transplants to remove, preserve, transport and transplant the kidneys into a human, and giving the standard immunosuppression therapy to the recipient.

Transplant recipient Jim Parsons helps open doors to the future of organ transplantation
This scientific and medical breakthrough would not have been possible without Jim Parsons, the recipient, or his family.

Parsons, 57, was a registered organ donor through Legacy of Hope, Alabama’s organ procurement organization, and he had longed to have his organs help others upon his death; but his organs were not suitable for donation. His family permitted UAB to maintain Parsons on a ventilator to keep his body functioning during the study. His native kidneys were removed, and two genetically modified pig kidneys were transplanted.

“Mr. Parsons and his family allowed us to replicate precisely how we would perform this transplant in a living human. Their powerful contribution will save thousands of lives, and that could begin in the very near future,” Locke said. “Mr. Parsons’ gift honors his legacy and firmly establishes the viability, safety and feasibility of this preclinical model. Because of his gift, we have proposed this to be known as ‘The Parsons Model.’”

Parsons’ ex-wife, Julie O’Hara, and their children, Ally, David and Cole, made the decision (along with Jim’s sisters and mother) to take part in the study after they were approached by Alan Spriggs with Legacy of Hope and Locke.

“Jim was a never-met-a-stranger kind of guy who would talk to anyone and had no enemies — none,” O’Hara said. “Jim would have wanted to save as many people as he could with his death, and if he knew he could potentially save thousands and thousands of people by doing this, he would have had no hesitation. Our dream is that no other person dies waiting for a kidney, and we know that Jim is very proud that his death could potentially bring so much hope to others.”

The critical need for other organ donation options
Kidney disease kills more people each year than breast or prostate cancer, according to the National Institute of Diabetes and Digestive and Kidney Diseases. Although transplantation is the gold standard treatment for end-stage kidney disease, fewer than 25,000 kidney transplants are performed each year in the United States and 240 Americans on dialysis die every day. Many of these deaths could be prevented if an unlimited supply of kidneys were available for transplant.

The wait for a deceased donor kidney can be as long as five years, and in many states, it is closer to 10 years. Almost 5,000 people per year die waiting on a kidney transplant.

About UAB
Known for its innovative and interdisciplinary approach to education at both the graduate and undergraduate levels, the University of Alabama at Birmingham, a part of the University of Alabama System, is an internationally renowned research university and academic medical center. UAB consistently exceeds $600 million in annual research awards and totaled almost $850 million last year, including one-time COVID-related funding. UAB is Alabama’s largest single employer, with more than 26,000 employees, and was named America’s Best Large Employer by Forbes in 2021. The institution’s annual economic impact on the state exceeds $7 billion each year. The pillars of UAB’s mission include education, research, innovation and economic development, community engagement, and patient care. Learn more at www.uab.edu.

A photo accompanying this announcement is available at: https://www.globenewswire.com/NewsRoom/AttachmentNg/33d4e6ff-7c94-45e9-b4b2-54b02013eabc